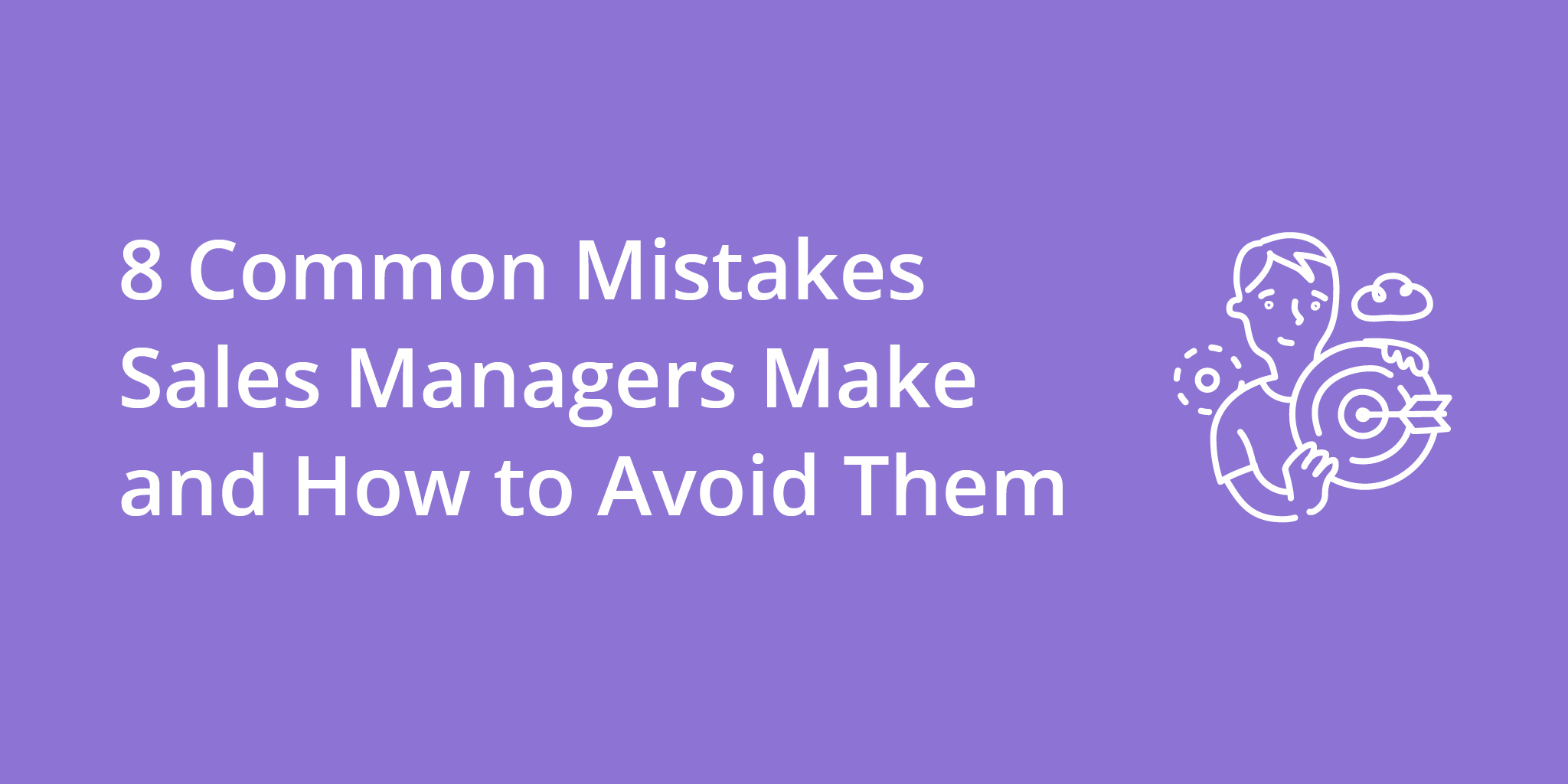 Being a sales manager may seem exciting, but it has its fair share of challenges. While in your previous life as a salesperson, you were responsible solely for your own performance, all of a sudden, your rating now depends on an entire sales team.

Your new role demands a complete shift in your work-life balance, and as you adjust, you are inevitably going to make some mistakes. Speaking of, to help you sidestep them, here is a dig into the most common sales management mistakes.

This is probably the most significant challenge new sales managers face upon their promotion. You are now the boss of your former colleagues and friends. Should that affect your relationship with them? Well, yes, it should, but many sales managers fail to recognize that.

They continue to treat their salespeople as friends. They base their decisions on the satisfaction of their friends rather than the betterment of the firm.

Instead: Set Clear Goals and Expectations

From the very beginning, set clear-cut goals and expectations from your team. Be upfront about how you want things to proceed and the consequences of not complying with your decisions.

Make decisions that are in the interests of your firm and learn to live with them even if they’re unpopular within your team (that includes your former friends and colleagues, etc.).

Be friendly; not everyone’s friend.

After their transition from salesperson to sales manager, many sales managers keep doing what they were doing before, thinking everything will fall into place – and they will excel further. This is, unfortunately, not the case.

Being a manager is very different from being a salesperson.

Instead: Embrace Your Leadership Role

A sales manager is a leader. You must start acting like one.

Let your team know of your values and principles. Share with them what’s expected of them and how you’ll gauge their performances. Set ambitious but realistic goals.

And more importantly, lead by example - make cold calls and take part in negotiations – show them how it’s done.

3. Not Coaching the Junior Sales Reps

Another common mistake new sales managers make is that instead of coaching their salespeople in the art of top-grade selling, they keep making all the sales themselves.

Whenever they see one of their sales reps screwing up a potential deal, they step in and save the day. This hampers the junior rep’s learning process and, more importantly, demoralizes them as they feel as if the management doesn’t trust them enough to get the job done.

Instead: Teach Your Sales Reps

Resist the temptation to step in and play hero whenever a problem arises. You might be able to resolve the situation right now, but what if you’re not there?

Try to look at the bigger picture. Let your sales team make mistakes and learn from them. In addition, find ways to impart your expertise to your team so they can improve faster. Use software that allows you to live call-coach agents, by whispering to them on the call without the other party overhearing.

4. Being Too Eager to Take Charge

Quite a few sales managers find it hard to let go of their stellar track record as a salesperson when they used to close deals for fun. So, they assume the role of an administrative assistant for their sales team.

Whenever a sales rep rushes over to them with a problem, they gladly take on that problem and resolve it themselves when it should’ve been resolved by someone else. Over time, they end up involving themselves in too many problems.

Take a step back. Let your team take charge.

If a salesperson from your team comes to you with a problem, ask them what they might think regarding its solution instead of taking it on yourself.

Giving them a bit of guidance is fine as long as you don’t make their problem your own.

New sales managers tend to underestimate the poor performance of their salespeople. They keep giving them the benefit of the doubt until the situation goes out of hand and the sales start to decline.

Don’t let a problem drag on. Deal with it right away.

If a salesperson isn’t performing well, be straight up with them about it. Encourage them to take the necessary steps to improve their performance.

The sooner you deal with a problem, the better it is for your business as well as your sales team.

6. Not Relying on Sales Automation Technology

Salespeople have to make hundreds of calls each day. The process of cold calling is draining – you can’t expect your sales reps to sound as passionate and interested on, say, the 80th call they make as they do on the 1st call.

Prospects can hear that lack of interest. If you’re not passionate about your service – why should they be?

Instead: Use Sales Automation

Kixie’s sales engagement platform enhances the productivity and efficiency of your sales team by seamlessly incorporating top-notch CRM integrations, voicemail drop software (which allows sending of pre-recorded voicemails to prospects at the touch of a button), and more into your business.

It also lets you analyze the performance of your sales reps from a bird’s eye view by providing you reports on their dials, connections, call durations, and more in the Kixie dashboard.

Being a sales manager doesn’t mean you can’t make mistakes. A great many sales managers try to appear invincible; even if they don’t know the solution to a problem, they pretend as if they do.

Instead: Be Honest and Upfront

When you make a mistake, own it and be transparent with your team about it. Try to find a solution to that problem collectively, as a team.

Furthermore, if you don’t know something, be open and honest about it. Don’t make excuses, as it’ll send the wrong signals within the team – and before you know it, you’ll end up with a team full of excuses.

Some sales managers are always on top of their salespeople. They walk around, looking over people’s shoulders, not letting them think on their own and make decisions.

Instead: Take a Step Back

Take a step back and give your salespeople some space. Let them make their own decisions; they’ll make mistakes, but in the end, they’re going to thrive.

Make yourself available, but not for everything. Rely on call recordings if you really need to check-in on your agents' performance.

Now that you are mindful of the most common sales management mistakes, are you ready to kickstart your venture as a sales manager on the right note?

Get in touch with Kixie today to start a free trial of our automation technology, or schedule a demo from one of our team members!

How to Increase Engagement With Personalized B2B Buying Experiences in 2022

8 Proven Ways to Use Automated Marketing and Sales Emails

How Kennected Doubled Their Call Volume With Kixie