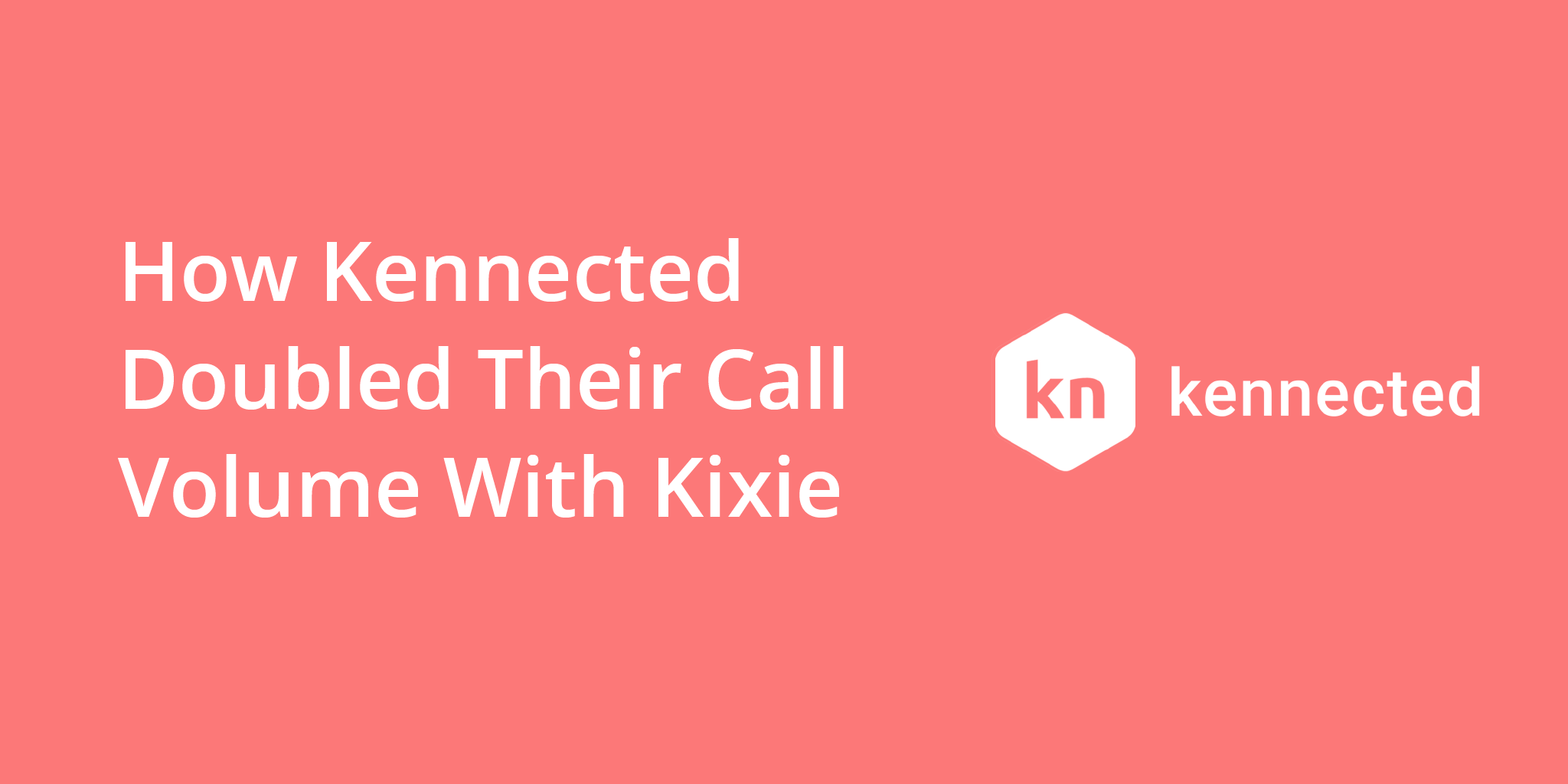 Kennected has experienced rapid growth over the past few years, and with it came the need to scale their sales tech stack. Since its founding in 2018, Kennected has helped over 17,000 businesses expand by generating new leads for their marketing and sales teams. They have now grown to over 120 employees, and rely on Kixie every day to support their outbound sales campaigns.

Scott Varner has witnessed Kennected’s growth first hand – starting as a Relationship Development Representative (RDR) before moving into his current role as the Sales Operations Manager. He is currently responsible for onboarding new RDRs and getting them up and running on their entire sales tech stack, and Kixie in particular.

Before using Kixie, the sales team at Kennected had no central phone system, which made their outbound calling efforts extremely cumbersome. “We didn’t have any sort of company phone lines or company dialers or anything like that, so everybody was literally calling from their cell phone,” Scott explains. “Or we could do HubSpot calling, and call directly through the browser rather than using somebody’s cell phone number.”

The sales team at Kennected relies on RDRs to set appointments with new leads and drive outreach to prospects, and relies on Account Executives to nurture those leads and close deals. Without a central phone system that connected to their HubSpot CRM, it was difficult and time consuming to keep track of outreach and follow up with new leads.

After adopting Kixie across their sales team, users at Kennected saw an immediate benefit from Kixie’s time-saving features, including click-to-call, voicemail drop, and SMS templates. With reps making 80-100 calls per day, saving 30 seconds each time a call goes to voicemail gives agents an hour back each day. “It’s always been a huge pet peeve of mine if they miss my call, now I gotta spend another 30 seconds listening to their voicemail recording,” says Scott. “The ability to just click “Drop” and then it hangs up the phone – that was huge.”

In addition to immediate benefits, the outbound sales team at Kennected also achieved long-term success. Specifically, they have seen productivity double while using Kixie’s PowerDialer. Relationship Development Reps at Kennected have been able to make twice as many calls with Kixie, which has helped to scale their business.

By integrating Kixie into their sales process, Scott Varner explains that the team has found many ways to leverage Kixie’s sales engagement features. One of the most valuable aspects has been the bi-directional integration with HubSpot.

“A pretty powerful part about Kixie would be the integration into our CRM, and what we’re capable of doing there with triggering different automation workflows, and so on. For example, when somebody becomes a customer, and they’re going through our onboarding process, Kixie has been able to integrate into those onboarding workflows to remind them of upcoming meetings, also shooting text message reminders.”

With more automated touchpoints built into the sales cycle, Kennected achieved an overall improved customer experience. “To be able to text message to remind people of upcoming meetings for onboarding was huge,” says Scott, “we had less no-shows after that.”

When asked how he would feel if he wasn’t able to use Kixie anymore, Scott sums it up in no uncertain terms. “Sad and drained and busy,” he chuckles. “Maybe even a little more stressed out because of the added work and added time spent on each individual call.”